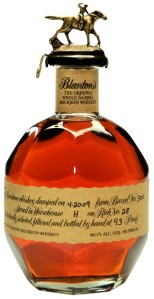 Thanks to /u/Vynidaris for this sample!

So I’m trying to keep up on boozing, but works crazy, personal life is busy (but good), and we’re slowly falling into the abyss that is the holiday season of crazy times and even busier times for my job.

Blanton’s Original Single Barrel is what’s up today. Or at least a few days ago when I reviewed it. Yet through the magic of text, you’ll read it all as one, and it won’t seem too disjoint.

So the big thing about Blanton’s Original Single Barrel is, according to ‘legend’, the first single barrel bourbon made. And these days they do the same thing, only taking single barrels from warehouse H and labeling the barrel on each bottle.

That’s a pretty impressive story. I don’t 100% believe it, as this is owned by a large company, and I don’t trust anyone successful to tell me the 100% truth. Otherwise they wouldn’t be successful.

And after that depressing statement, let’s have a drink… and see how it tastes.

Starts off with some strong flavours. Lots of citrus and other fruits. Eventually dies down to a morning dew/grass smell.

I wish I didn’t say morning dew originally. First off, it sounds stupid. Second I didn’t know what else to say. So it’s morning dew. Not night dew, or mountain dew, or Tullamore Dew.

Woody. Nice amount of citrus and nice flavours to it.

Somewhat simple though. I think I was expecting a little more, given this is one of Buffalo Trace’s brands, made by the creator of single barrels. And chupacabras, for all I know.

Conclusion: I want a little bit more. No, I want a lot more in my mid-end bourbons.

Don’t get me wrong: It’s too expensive in Canada. It should be lower. No one is denying that.

Just… I want a little bit more. It’s a cool bottle, and a nice story, and the stopper is super cool. The whiskey starts with some interesting, if okay notes, and then goes on to just be.. meh.

Oh well. Maybe it was just this one barrel. 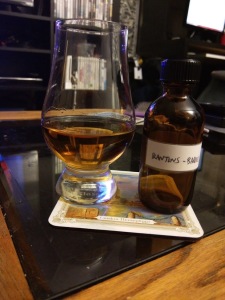