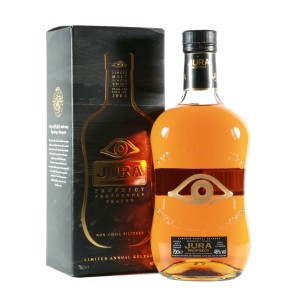 One okay Jura deserves another. That’s what my ancestor’s used to say… until they were horribly maimed by Islanders who felt losing their land was an affront.

But enough about my checkered ancestry, first up I’d like to thank /u/Devoz[1] from the bottom of my potentially sinned family heart for a sample of this dram. I’ve been wanting to try it for awhile now.

Isle of Jura Prophecy is a NAS offering from Isle of Jura. Limited to 10,000 bottles per year, this version is made up of various different casks of peated whiskies, and finished off in Oloroso sherry cask. It’s also non-chill filtered, which I’m impressed by.

The name comes from an old legend involving a soothsayer/seer/crackpot who cursed the Campbell family when she was thrown out of Jura back in the 1700s. Her obtuse prediction came true, and thus we have a whisky now.

Let me tell you something about curses: My family has one, and it says we’ll all be self-deprecating, and I don’t really think…. 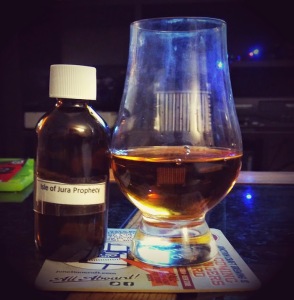 Price: N/A at the LCBO at the moment

Strong spices come off this one. I’d be lying if I didn’t say I love cinnamon, and this has it in spades. And it takes a long time to really open up. I spent at least two episodes of Archer finding each nook and cranny on this one.

I wonder if drinking this will remove the curse…. wait, that’s dumb. I’m being stupid.

Well, it would seem it doesn’t.

Anyway, this is earthier than peat. Think more like a dry highland than an Islay. Tons of spice too to match. Almost too much of each. Actually yes, there’s too much earth.

Which, in hindsight, I wish my great great great grandfather had said when he was burying those Gypsies as punishment for stealing a turnip. Oh well, guess we’re all idiots.

Salty finish, which is to be expected from an Island dram. Less earth than before. Actually less of everything. The finish is a weak point on this one.

Granted so was building our home on a Native burial ground, but other than our pets coming back to life, it’s worked out well for us.

Conclusion: Cards on the table: All of the above is a joke. My family weren’t butcherers, on either side. They were basically all farmers. We’re not cursed, I just use self-deprecation as a coping tool for years as a nerd.

But what about this whisky? Well, it’s tasty, for one. I’d go out and say better than Superstition, if only by a little bit. I think there’s definitely some room for improvement. There’s too much earth in the taste, and the little amount of red fruit from the sherry is almost lost.

I’d say this is a nice dram to sit back with. The price is a little steep for what you get though, so I’d probably only have a dram of it every so often, and stick to the Superstition.

One thought on “Isle of Jura Prophecy”