Yadda yadda yadda, birthday, yadda yadda, some joke, blah blah, Go to The Feathers Pub, food is good, I went twice, this is a series.

Caught up? Great. No? Look through my past reviews, you’ll get it soon enough, we’re wasting daylight people.

So I go to finish the night, and while I had planned to have 2 more, I was informed that people needed to work (including me), that it was getting late, and I may be getting a little hammered.

So, after a Stout & Steak pie (so freaking good), half a bumble berry crumble (huge, tasty, and rich), and then a glass of water between each whisky, I was ready for the last one.

And it was obvious which one it would be. While the votes were neck and neck, this is a dram I’ve been waiting to try since I started going to The Feathers Pub. Frankly, unless I heard it was bad, I was ordering this one.

Anyway, this is comprised of 1976 and 1977 casks of whisky. Each bottling run is, thus, older each time.

So, do I know which year I tried? Of course not, that’s a giant pain to find out and it was busy enough at the pub without some Whisky Nerd being all question and answer BS while others are trying to just get a pint.

None the less, take that in for a second: Before production was halted in 1981, they took some casks, and kept them. Then, 25 years later, they released it. And it’s from Ardbeg. The place that some people would trade limbs to try.

However, I have had some 70s Ardbegs before. So will this live up to them? Or be just okay? Let’s see. 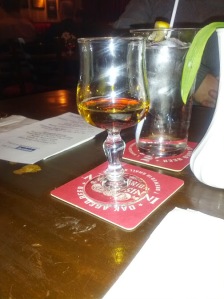 Price: N/A in Ontario, though currently it goes for upwards of $2000 a bottle.

If you didn’t know any better, you’d think this was typical for an Ardbeg. There’s a shit ton of peat, so.. yeah, it’s an Ardbeg.

However it really has more to it. The peat doesn’t just take over. It’s like this helpful monkey you makes all the chocolate, pear, and spice notes better.

However, given some time, there’s almost a rum undertone going on. I actually drank another glass of water to ensure that nothing was throwing me off, and had others at the table try it, and yes, there’s a molasses/fruity bevy of happy times there.

The finish is long. You feel like that campfire will never end. Ever. And you’re eating raspberries along with Smores. And the sky is outstretched, and you can smell the lake and the flowers and the pine trees and maybe a bear but you don’t care cause you have fire.

Yeah, it’s so good you become a caveman.

Conclusion: I am biased as fuck when it comes to Ardbeg. Still one of my favourites, and it remains amazing.

Hands down, this is tied for the best dram I’ve ever had. It has tons of complexity, relaxes me, is peaty, is sweet (but not unbalanced), and it just works so well. Honestly amazing.

Try this when you get a chance. Don’t procrastinate, like I did.