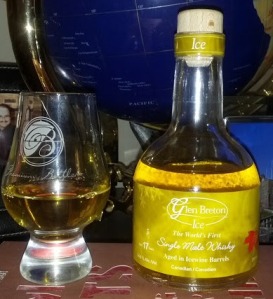 It’s kinda hard being a Canadian at times here on /r/worldwhisky.

For one, I pay almost as much as Australians for whiskey, however they are having this wonderful renaissance going on, where as my country has laws that require Canadian whiskey to taste like… Canadian whiskey. Mix that in that there are such HUGE barriers to changing anything within my province (Ontario), and the fact that most people just mix it, and here we are. Not to mention that convincing ANYONE that there are at least 3 good Canuck whiskeys is like selling ketchup Popsicles to a woman wearing white gloves. And the idea of having a Canadian flag on this subreddit is seen as a detriment because of the amount of foul, maple whisky coming from the Great White North. It’s pretty rough!

And then there’s Glenora distillery, the First Canadian Single Malt. Hold on for a second, I come to bury Glenora, not praise them. I first had Glen Breton Rare 10 on my first wedding anniversary, as I was at the CN Tower and I hadn’t had a chance to try it before. To say the least, I wasn’t impressed. It wasn’t really balanced, and as such I finished it and enjoyed the view.

Jump ahead a few years to doing some reviews. Over and over again, reviews of the Rare 10 are inconsistent. Some like it, some see growth, others find soap and mold.

At the same time I started enjoying Cask Strengths more and more, and as such started looking for a Canadian Cask Strength. And that led me back to Glenora: Glen Breton Rare Ice 17 year Cask Strength Single Malt was the only Cask Strength Canadian whisky sold in my province, of the 3 that were sold in the country (that I could find, please prove me wrong, I want to be wrong). Also there were only 3 bottles in the province at all.

At the suggestion from a Glen Breton fan, Glenora approached Jost Vineyards, an award wining Nova Scotia winery, requesting to use one of their oak barrels once used for their Ortega Ice Wine to finish one of Glenora’s cask strength whiskies. With the partnership in place the experiment began. Because Ice Wine is powerful in it own unique way Glenora tasted the its whisky each day as it picked up trace hints of sweetness and fruit from the grape. After 4 months it was felt that the ideal finish was achieved.

There you have it. Let’s see if this ends up filling me with regret.

Well, there you have it, very straight forward, moving onto the….

Wait, what? Oh! Fictional person talking to the screen for comedic effect has informed me that the average person hasn’t drank Ice Wine, and also that Ice Wine can differ between wineries. Damn Philistines! Not drinking regional expensive select taste wines while reviewing whiskey!

The typical soap/spice is there from the Glen Breton, however the ice wine has really given a lot of additional nice flavours throughout. It’s very hot though. Super hot. At 54.6%, I’m not surprised, but this is anti-smooth at this point. If you try this one, let it breathe. A lot.

This is a nice finish. Granted the maple devil is back, but that’s legislation for you. Medium length on it, which again, is a nice change, though the tar really sticks with you afterward.

Conclusion: You’re going to find this way, way too sweet. It’s a Canadian whiskey (already sweet) with floral elements (which compliments sweetness) finished in wine that typically comes in at least of a 14 sweetness level (woo boy that’s sweet). That being said, I like sweet things, and this is tasty. The nose is wonderful and take full advantage of the Ice Wine. The Finish starts out nice and then flames out. The taste is better than the typical Glen Breton Rare 10. Overall this is an upgrade, though the distillery needs to step up their game, especially with Scotland informing them they can’t use the term “Glen” anymore.